In my last post, I wrote about Elizabeth Harlan’s father, Stephen Harlan (1740-1830), and the family trek from Chester County Pennsylvania to the frontier regions of North Carolina, that story can be found HERE.

Elizabeth would have been approximately three years old when her family migrated from the Pennsylvania colony to North Carolina. They initially moved to Cumberland County, NC and by 1769, when she was seven, had moved to a more frontier area of North Carolina in Guilford County that later was sectioned off to become part of Randolph County.  Her father was a farmer, millwright, and wagon maker. The post about her father is HERE.

In the years just prior to the American Revolution Quakerism in North Carolina experienced its second great wave of migration and growth, and by the 1770’s, the greatest concentration was in the Piedmont region where the Harlans moved to. Eventually, there were twenty-three Quaker monthly meetings in North Carolina, each composed of representatives from several individual meeting houses, who sent delegations to two Quarterly Meetings in the eastern and western parts of the colony. A Yearly Meeting of North Carolina Friends (eventually held at the New Garden Meetinghouse) met and maintained contact with Yearly Meetings in Philadelphia and London.

When Eleazar and Elizabeth were fourteen, the American Revolution began. Many Americans today don’t realize that the revolution took place over five years, 1776-1781.

After the Regulator's War (See entry on Elizabeth’s father, Stephen Harlan, for an explanation of the Regulators War,) when it became apparent that such conflicts were not over and would eventually result in greater bloodshed, the North Carolina Yearly Meeting convened on October 27, 1775, to issue an epistle which set forth the position of North Carolina Friends with regard to any future political contests. The epistle defined the principles which governed North Carolina Quakers throughout the revolutionary years. Reiterating their opposition to war yet avowing their allegiance to the Crown and insisting that many engaged in the dispute with England were “Honest and Upright”. It also spoke of all "Plottings, Conspiracies, and Insurrections” as works of Darkness" and reminded Friends of advice from the London and Philadelphia Yearly Meetings "not to interfere, meddle or concern in these party affairs".

Quaker religious principles forbade them from condoning the overthrow of any established government; and required obedience to the existing government, when such obedience did not run counter to conscience was a fundamental duty. To the revolutionary forces this seemed to place the Quakers in the Loyalist camp. On the other hand, since the Friends would not directly help the Crown, to the British authorities, they seemed to be in sympathy with the rebels. The Quakers themselves wanted to be left out of all of it, to remain peacefully in their homes and to be neutrals in the conflict they saw coming. North Carolina Quakers would not bear arms, pay muster or "draughting" (drafting) fees, or hire substitute soldiers, pay taxes to a government which might support its military operations, or hold office under it. Friends also declined to vote for delegates to the state constitutional convention in 1776 and debated over the use of paper money issued by the revolutionary government, eventually deciding to leave that to each individual Quaker’s own conscience.

It was not easy being neutral. The Friends could not resist confiscations of their property for nonpayment of taxes and fines by either the Crown or the revolutionary government. Friends also had their lives threatened and/or were beaten by both sides for refusing to join the local Crown or Patriot militias.  Additionally, their lands were often plundered by military forces on both sides of the conflict. Quaker homes, barns, and pastures were repeatedly destroyed as armies moved through the lands; their horses were taken for army mounts and their cattle and sheep for food for the armies and fences were dismantled to be used as firewood.

As much as they tried to stay out of the conflict, the war brought the conflict to their door in 1781, with the battles of New Garden, Guilford Courthouse, and Lindley's Mill. On March 15, in the early morning hours, Lieutenant General Charles Cornwallis sent off his baggage under the escort of Lieutenant Colonel John Hamilton’s Royal North Carolina Regiment, 20 dragoons, and Bryan’s North Carolina Volunteers, to Bell’s Mill and marched with his army to attack Major General Nathanael Greene at Guilford Court House. Greene had placed troops out in advance positions to the south and west to give him fair warning of any potential attack. When the front line of the British army, led by Lt. Col. Banastre Tarleton, encountered Lt. Col. “Light Horse” Harry Lee’s troops just north of the New Garden meeting house, British and American soldiers crashed into each other in the narrow lane. After the initial clash, the British cavalry were pushed back, across what is now the Guilford College campus to the New Garden meeting house where they were joined by infantry units. The two sides exchanged fire twice more before American forces retired north towards Greene’s army. The entire clash took over three hours and involved 617 Americans and 842 British (including American Tories and Hessians). About thirty British were killed and more injured.

Several hours later the same day, British and American forces met again at the Battle of Guilford Courthouse in the streets in front of Quaker houses. This battle has been called "the largest and most hotly contested action" in the American Revolution's southern theater and involved a 2,100-man British force under the command of Lieutenant General Charles Cornwallis and 4,500 Americans under Major General Nathanael Greene. After a brutal battle, Cornwallis defeated the Americans but lost approximately 25% of his forces in the process and was in no position to pursue Greene. Cornwallis decided to withdraw to his supply base in Virginia to rest and refit.

After the Battle of Guilford Courthouse, there were hundreds of wounded American and British soldiers. Cornwallis left his wounded at the New Garden community under the care of the Quakers. When General Greene learned of the Quakers’ generosity, he wrote a letter to the Friends requesting they provide “relief of the suffering wounded at Guilford Court House.”  The Meeting responded that they would “do all that lies in [their] power” to assist the wounded, despite the recent theft of resources by both British and American soldiers.  The New Garden Friends cared for 250 wounded British and American soldiers in the Meeting House. They were cared for in an old two-story log house at the corner of New Garden and Ballinger Roads, and at New Garden Meeting House, and in nearby Quaker homes. Of those who did not survive their care, British soldiers were buried under an old oak tree in the New Garden meeting 's graveyard with the bodies of the American dead buried beside them.

I don’t know whether Eleazar and Elizabeth were involved in the nursing of the soldiers but Eleazar lived in that area at the time so it is likely he helped especially as members of his mother’s family are referenced as assisting with the wounded in several history articles and books.

The first record I have on Eleazar, after his birth, is his marriage to Elizabeth Harlan on 12 July 1784. Like her parents before her, Eleazar and Elizabeth went outside the Quaker meeting to get married. On for October 1784, the meeting records for the Deep River Monthly Meeting in Guilford County North Carolina, state “also complains of Eleazar Kersey for going out in marriage; therefore this meeting disowns the said Eleazar Kersey to be a member of our society until he condemn his misconduct to the satisfaction of Friends William Tomlinson is appointed to inform him of the proceedings of this meeting against him with his right of appeal, and that he may have a copy of this minute by applying to the clerk.”

Eleazar and Elizabeth’s daughter, Esther, was born in about 1784, and may have been the reason the couple did not wish to go through the multiple monthly Meetings involved in a Quaker marriage procedure (I described the marriage procedure in this post on Ezekial Harlan). Their daughter Ayles (Alice) was born on 6 April 1785, in Springfield in Guilford County North Carolina. It was some years before Eleazar requested readmittance to the meeting, fitting the pattern I learned of while researching for the post on Stephan Harlan, where oftentimes a couple who had married outside of the Society would seek readmission just prior to requesting a certificate of transfer to move to a new meeting.

Eleazar was doing well as a landowner and farmer. On 16 May 1787, a survey was performed on his land. It shows he owned 450 acres, on both sides of Richland Creek. The survey document was recorded (perhaps recorded again) on 30 November 1796. 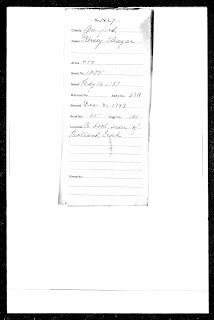 On 30 November 1796, Eleazar expanded his land by buying 129 acres by Richland Creek from Arthur Carney, for 60 pounds. Two years later, Eleazar and Elizabeth’s next son was born on 15 July 1798 and named after his father, Eleazar.

On 5 September 1801, the Springfield monthly meeting minutes stated that “the preparative meeting informs this that Eleazar Kersey requests to have his children joined in membership, and they have been under the care of the preparative, this meeting grants the request. Their names are Stephen, William, Enoch, Jesse, Eleazar & Moses.” A month later, on 3 October 1801, the Springfield Women’s Monthly Meeting minutes, reflected that “Elizabeth Kersey requests for her two daughters, Ayles & Esther, to be joined in membership & they having been under the care of the preparative meeting some time, this meeting grants for request.”

The next record I have for Eleazar is on 9 September 1815 when he was appointed to represent the Springfield Monthly Meeting and attend the coming yearly meeting. Later that year, on 4 November 1815, the minutes of the New Garden Quarterly Meeting, a regional governing body above the local monthly meetings, show that “Elazar Kersey” produced a certificate from the Springfield monthly meeting to the New Garden quarterly meeting recommending him to the station of Elder, which was accepted. This shows that Eleazar was a respected leader within his community. He was 53.

Unfortunately, tragedy struck the next year and on May 29, 1816, Eleazar wrote a short will, just before dying on June 1, 1816. The will was probated in August 1816. It read: “Be it remembered this 29th day of this fifth month in the year of our Lord one thousand eight hundred & sixteen that I Eleazar Kersey of Guilford County in the state of North Carolina being sick and weak in body but of sound mind & of majority make this my last will & Testament in the following manner it is my will that all my just debts and funeral charges should be first paid and discharged by my executors hereinafter named. Item I give & bequeath unto my loving wife Elizabeth Kersey all my movable effects except what is hereafter in this will directed to be given to my children and when she has done with it let my daughter Elizabeth Kersey have what remains thereof And let my wife have full privilege of living in my dwelling house during her widowhood, also her maintenance.