See You In The New Year! 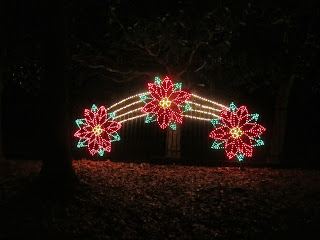 I'm sorry I missed putting up my Wordless Wednesday photo. Things have been getting zingy with Christmas preparations and work responsibilities, then I went and got sick. Even I can see that sign, lol! As I have a chronic illness that is exacerbated by stress (gastroparesis), I know that I have to start off-loading responsibilities and take things a bit slower so as not to flare. And, believe me, I don't want to be unable to eat anything at Christmas time! So, I'm going to put the blog on hiatus until after New Year's Day.

You all have a wonderful set of holidays and I'll see you in the New Year!
Posted by Jo Henn at 1:16 AM 2 comments: 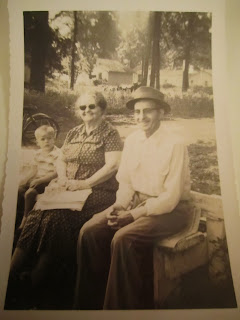 Aren’t they a cute couple? (I don’t know who the little boy is.)

In researching my great-grandparents I discovered what treasure trove city directories can be! Philip Snyder and his wife lived almost their whole life in one town, but due to the generosity of the city  of Findlay Ohio in allowing its archive of city directories to be digitalized and put online, through Ancestory.com, I know more about them than the once every ten year Census would normally allow me to know.

Philip Aaron Snyder, was born on 18 July 1882, in the town of Forest, Ohio, which was then in Wyandot County (now it straddles Wyandot and Hardin Counties), to John and Katharine (Snyder) Snyder, twenty-one miles outside of the city he would live in most of his life. The woman who would become his wife was born nine years later, on 8 March 1891, in Findlay, Ohio, to Edward Carleton and Martha Emily "Emma" (Wolfington) Bailey.

By the time Philip was 18, his family lived in Findlay OH, where his father worked at a saw mill and Philip was a Motorman, according to the 1900 U.S. Census. His maternal grandfather, who was 69, lived with the family at that time, and his occupation was listed as jeweler. One of his sisters and his only brother had died by 1900. His second sister, Mary Margaret (Mollie) had married Marion Greer two years before. The 1906 and 1909 city directories indicated he lived at 432 W. Lima Street in Findlay and listed his occupation as “laborer”; the directory indicated that this was also his parent’s address. The address, 432 W. Lima Street, is one digit off of the address written on the back of the picture of the house I posted earlier  where the handwritten inscription says that Philip bought the home at 431 W. Lima for his wife (oddly I found nothing else that ever placed them at 431 W. Lima. Perhaps whoever wrote the inscription on the photo made a slight mistake on the address). 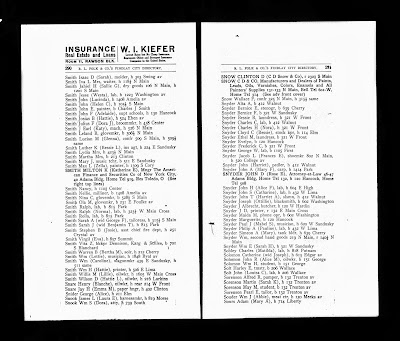 In 1900, Pearl Pauline Bailey was at nine years old the youngest child in her family. In the Census, she was listed as Pearl. Three older brothers (Howard, Floyd (or Lloyd), and James) and one older sister, Myrtle (who later became the missionary to China of whom I’ve written before) still lived at home. Her family lived in Findlay Ohio, where her father was a blacksmith. [I’ve found references to another brother also named Lloyd in other sources; one was Lloyd Wellington Bailey and the other Lloyd Weldon Bailey. At first I thought that it was simply a case of name mix-up but Pearl Pauline’s father’s obituary refers to both of these sons surviving him so it appears instead to be a case of parents reusing a favorite name, never thinking how that would confuse future genealogists!]  I don’t know yet how to tell exactly where the family lived in 1900 using the Census, but according to the Findlay City Directory in 1904 the family lived at 519 Hull Avenue (her parents would continue to live there the rest of their lives).

On 8 March 1909, Philip married Pauline (as she was called thereafter) in a ceremony held in the parsonage of the Assembly of God Church; the Rev. T.K. Leonard officiated. Philip was 26 and Pauline was 18. Pauline’s family belonged to that church. I don’t think Philip’s family were members of this church before the marriage, as John Snyder's obituary said he was a member of the Evangelical Church, but Philip and Pauline were members of the Assembly of God Church thereafter.

The 1910 Census shows Philip and Pauline living at the same address as his parents, with a baby son, Clarence (my grandfather, who was born 22 March 1910), and lists his occupation as Timber Cutter.  The 1911 and 1913 city directories indicate that he was a now a Timber Buyer and that he and Pauline had moved to their own home on 525 W. Lima Street.

As Philip had had to register for the draft on 12 September 1818, he was undoubtedly much relieved that WW1 ended less than a year later via the Treaty of Versailles on June 28, 1919. The draft registration card tells us that, at age 36, he had brown hair and eyes, was of medium height and large build. It lists his occupation as Lumber Dealer and indicates he was self-employed. 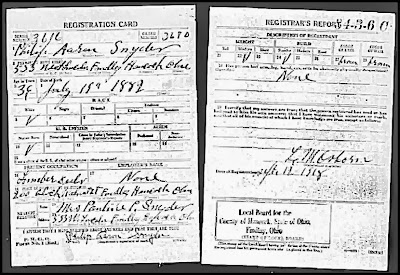 Something must have happened to Philip in the early 1920’s that I have not yet been able to find as the 1920 Census indicates that he is not employed and the 1923 City Directory also list no occupation for him. The 1923 directory does indicate that the family had moved to 305 East Street in Findlay.

In 1925, when Philip was 43, his father died. I don’t know yet whether there was any inheritance involved, but it does look like his life had started to improve by 1925 as the city directory states that he was a Dealer in Native lumber and Buyer of All Kinds of Timber. They are still living at 305 East Street, and, for the first time the directory lists a telephone number for him: Bell Telephone Main 3269-W. He was still listed as a Timber Buyer in 1927. But in 1929, his occupation changed to “Real Estate”. 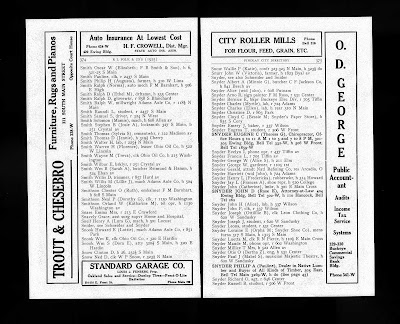 The 1930 Census shows that four of Philip and Pauline’s children still lived at home: Clarence, 20; Phyllis, 16; Paul, 13; and Don, 12. Their daughter Christina had married Warren J. Buntz, jr. on 18 February 1929, in a small ceremony in the parsonage of the Assembly of God Church. The Census listed Philip’s occupation as a “tire builder” and states that he works at a [indecipherable] Plant.

The 1931 City Directory indicates that Philip now worked for the National Refining Company, as a Laborer. The city directories showed me that he continued working for that company in various capacities until he retired sometime after he was 66 (there’s a gap in the directories between 1948 and 1955). The 1933 directory showed that the family had moved to 524 Eben Avenue and that Philip was now a Car Worker at the Refinery.  Two of Philip and Pauline’s children had married and moved out by 1933: their daughter Phyllis married Ralph Norris Fry on 24 November 1932, and by 1933, their son Clarence had married Mabel Erwin (my grandparents).

By 1939, Philip and Pauline had moved to 2711 N. Main St, Findlay.  Their son Paul was married sometime before 1940 to Sara May Bowman, and their youngest son Don had joined the Army in the early 1940’s (well, first he joined the Ohio National Guard, but he later served in the Army in WWII). Don also got married sometime in the early 1940’s (probably 1942) to Ardyth Ebersole of Arcadia.  Tragically, Philip and Pauline’s daughter, Christina, died in an automobile accident on 9 September 1942, and her husband was severely injured. Philip and Pauline stepped up to help care for their daughter’s young children. On 13 May 1947, the Findlay Republican Courier carried a story wherein Mr. and Mrs. Philip A. Snyder announced the engagement of their granddaughter, Rosemary Buntz, to Homer Boatman.

Philip must have retired by 1955 as the city directory henceforth lists no occupation for him. He and Pauline live at 2711 N. Main St, Findlay at least through his death, in 1967, at age 84, of leukemia, after being ill for several years. The obituary noted that he was survived by his wife, three sons, Clarence, of Huron O; Paul, of Detroit; and Don, of Toledo; his daughter, Phyllis Fry, of Findlay; 17 grandchildren; 31 great-grandchildren, and 5 step-grandchildren(!).

Pauline lived for another 11 years until she died on 30 July 1978 at the age of 87. She continued to be active in her church throughout those years. 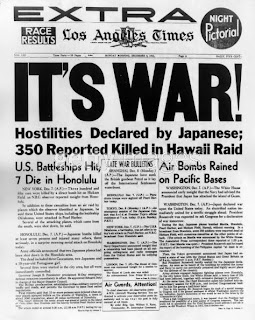 On December 7, 1941, the United States suffered about 3,700 casualties in a morning surprise attack on Pearl Harbor, Hawaii. Each year we honor our dead in our remembrance of that day of infamy. We should never forget.

But what I somehow did not know until I started doing my family history research was that on December 7, 1941, the Japanese also conducted surprise attacks sending hundreds of Japanese fighter planes and bombers against Hong Kong, the Philippines, Singapore, and other key Allied defense bases in the Far East; these attacks were followed by ground forces which quickly captured the areas. Over 700 American missionaries, men, women, and children, and were caught in the cross-hairs of these attacks. In China and Hong Kong, many the missionaries and other civilians who were trapped in Hong Kong, including 3,000 British, 300 American, and about 100 Dutch, including children, were herded into the Stanley Internment Camp at the south end of Hong Kong Island, where living conditions were extremely poor, unsanitary,  and there was very little food. For some this internment lasted 44 months.  Other American missionaries were placed under house arrest in their own homes, which were taken over by Japanese officers and soldiers. My great-grand-aunt Myrtle was one of the American missionaries put under house arrest, along with the 15 orphans she had been caring for, and others who had sheltered in her home during the bombing. She was held under house arrest, subsisting on one handful of rice per day per person, for seven months, until she was given an opportunity to participate in the repatriation exchange negotiated between the Allies and the Japanese in which some 1500 people (each side), including 500-700 missionaries, were exchanged ship-to-ship in the closest neutral port in Mozambique. I’ve written my great-grand-aunt Myrtle’s story here. Her story and those of the other internees and prisoners of war of the other Japanese surprise attacks on December 7, 1941, as well as those who died in them, should also never be forgotten. 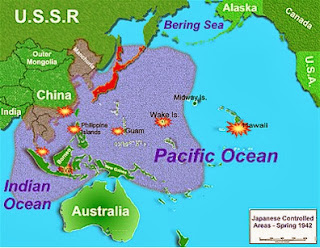 [Information drawn from research done for post on Myrtle Bell Bailey, see cites there.]
Posted by Jo Henn at 2:34 PM No comments:

Wordless Wednesday: My grandparents -- at 17! 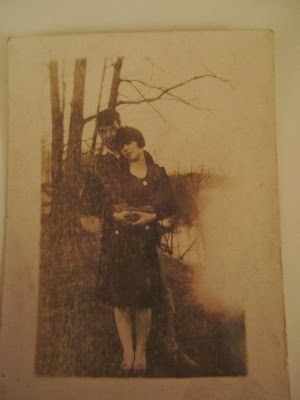 The back of the photo says, "Clarence & Mabel, Camp Pittenger, Tiffin OH, 1927"
Clarence Snyder and Mabel Erwin would have been 17.
Posted by Jo Henn at 1:43 AM 2 comments: