One of the first things you learn in doing genealogy research is not to be wedded to the spelling of your family name (or any first or middle names, for that matter...or the order of the two names which may be first or middle names)! Spelling was not so important to our ancestors. And if the family was big enough,  names can repeat within the same generation - especially if the first child with that name died early and the parents still like that name, then another child in that family may get the same or a very similar name as their deceased older sibling. The four names listed in the title are the four spellings I've found used for my (probable) third great-grandfather's last name!

I am very lucky, in researching the Snyder side of my family to have a copy of a few handwritten pages by my great-grandmother, Pearl Pauline Bailey Snyder, who took the time to write out her recollections of her (Bailey) and her husband's (Snyder) family in the two generations above. She freely admits in the writing that she's forgotten a lot, and some things she never knew, but it is full of delightful details about the people she could remember. [I will transcribe it for the Tree, so others can read it too.] In addition, someone, perhaps her as the handwriting is similar, hand-sketched out a five generation family tree of the Snyder side. It mostly has names - some with question marks by them. Four names have birth and death dates, and there is one marriage date. The date when John Snyder married Katharine (Katherine/Catherine/Kate) Snyder (Schneider). 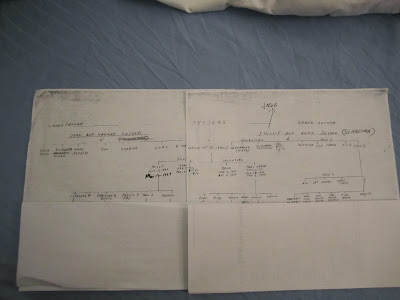 Yes, on top of the usual spelling challenges we have persons from unrelated Snyder families marrying! And both  families contain the names John, Phillip/Philip, and Hannah/Anna in multiple generations! Plus, Ohio seems to be overrun with Snyders in this time frame that don't necessarily seem to belong to either of these families. It's slow going, folks.

I've found great-grandma's notes are helpful, but not necessarily reliable. Or rather, what's there is good, but she tended to leave out family members entirely, and she identified a quarter of the women only by their married name (she didn't include the woman's first name, only their husband's: Mrs.(man's name) I don't know which daughter is which!) and some only by a first name or a nickname. But still it is helpful in confirming that I'm looking at the right family. I'm also following my practice of developing out the brothers and sisters families for at least a generation, as that also tends to help me confirm I have the right family in censuses. I also checked some newspaper sites and a couple obituaries for brothers and sisters were very helpful (they name everyone in the family and where they are at that given moment, and sometimes name parents, too, even if they are dead.) But I still got stuck trying to make the connection above the Philip (1831-1909) that is Katharine's father, who great-grandma says is Jacob.

At that point I decided to go at this from a different direction. Nearly everyone in this branch of the family has been in Hancock County, Ohio for most of the period I've been looking at. They've all been buried in one of three cemeteries. I decided to go look at who FindAGrave.com has listed in those cemeteries under any possible spelling of Snyder. Jackpot! I think. There's a Jacob Schneider buried in the same cemetery as Phillip Schneider/Snyder and a George Schneider (great-grandma said Philip had a brother George). And Jacob (1792-1871) is born in the same general area of Germany that Phillip seems to have been born in, according to the inscription (which the volunteer for FindAGrave has helpfully translated from the German it's written/chiseled in). I think that they are probably family. I don't know who Phillip's mother is yet, but this is enough for now.