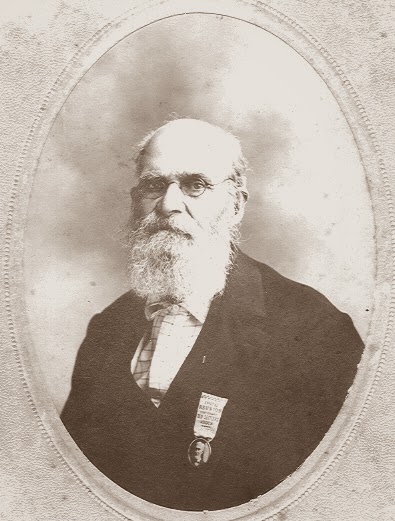 Crawford Erwin is my third great grandfather, and it is through researching his family that I connected with my first previously unknown cousin, a third cousin once removed, Jimmie Ferguson. He had several photographs of our mutual several times great grandfather and he graciously allowed me to use the photo above for my blog. Jimmie is descended through Crawford’s son ,Edward, from his second wife, and I am descended through Crawford’s second son from his first marriage.

I’ve done several posts about others in Crawford Erwin’s family. He is the son of Judge William Erwin and the father of John Erwin and Eli Erwin. They have been easier than some to write about as biographical sketches of several family members were written up in History of Wayne and Clay Counties, Illinois", published in 1884.

The book describes Crawford Erwin as one of Hoosier Township's "best and most prominent farmers." He would have been sixty-six when it was published. Crawford was born on April 19, 1818, in Lawrence County, Indiana, when his father was 40 and his mother was 35. His father, William Erwin, moved with part of his family, including Crawford and two of his brothers, to Clay County in October, 1832.  Crawford was fourteen at the time.

Crawford Erwin was “brought up among the deer and other wild animals, and hence early learned the use of fire-arms. He has killed many a deer and other wild game.  At one time, upon returning home from taking his grandmother to his aunt's, he saw a herd of seven deer. He at once brought his gun to his shoulder (for they always carried guns then), and fired without getting off the horse.  The ball passed entirely through the deer he had shot at, and entered another one just in the rear, killing both of them. This was a wonderful feat for a boy. “ (I think it was pretty amazing since he likely had a muzzle loading rifle. It probably also was a flintlock rifle. Percussion rifles had just been invented in the 1820’s and were more expensive and thus not likely to have been given to a boy. The U.S. army had adopted an early single shot breech loader in 1819; but again, given the expense, it is doubtful that a boy had one.)

In 1837, when he was 19 years old,  he married Eliza A. Craig (my third great-grandmother), daughter of Adam Craig, an early settler of Clay county; she was also 19. They had seven children, two of whom  died in childhood, in 1852, (Sarah Jane, 13, and Elbert, 16 mos.); those who survived to adulthood were William, John, Eli, Lafayette, and Elizabeth Adeline. Eliza died in February 1855, and Crawford again married, July 3 of the same year; this time to Mrs. Rachel Humes Milligan. (While this might seem like unseemly haste, Crawford was a farmer, which would have involved long hours in the fields, or hunting for meat for his family, and when Eliza died, their youngest surviving child was only one year old, and the rest were boys of 7, 12, 14, and 17. He needed someone to care for his youngest sons and baby daughter.) Rachel also likely needed a man to help provide for her children as the 1860 Census shows four children under 15 with Rachel’s prior married name living with Crawford and Rachel. He and Rachel had another five children together, two of whom were living in 1884 when the county history book was published, Angeline and Edward Everett.

When the Civil War broke out Crawford’s three oldest sons left to fight for the North in the Missouri Volunteer Infantry, and his fourth son fought for the North in the Illinois Infantry.  Crawford's eldest son, Capt. William Erwin, Captain of Company D, Eleventh Regiment Missouri Volunteer Infantry, was killed in front at Spanish Fort, Ala., while “heroically leading his men on to victory”.  His third son, Eli, a private, was badly wounded at the Battle of Shiloh; and, while records show he survived in hospital a few months, he never made it home. His second son John was wounded in his first service but returned to fight again, and survived the war, to return to Clay County. The youngest of the four, Lafayette, also survived, and subsequently moved to California.

At the time the county history book was written, Crawford owned 347 acres of land and resided along the northern township line (sort of in the central portion) of Hoosier Prairie, Clay County, Illinois (see picture below, click to embiggen). He was a member of the Methodist Protestant Church, and of the Masonic order. For ten years, in addition to being a farmer, he held the office of Justice of the Peace, and “also has held other offices of trust”. 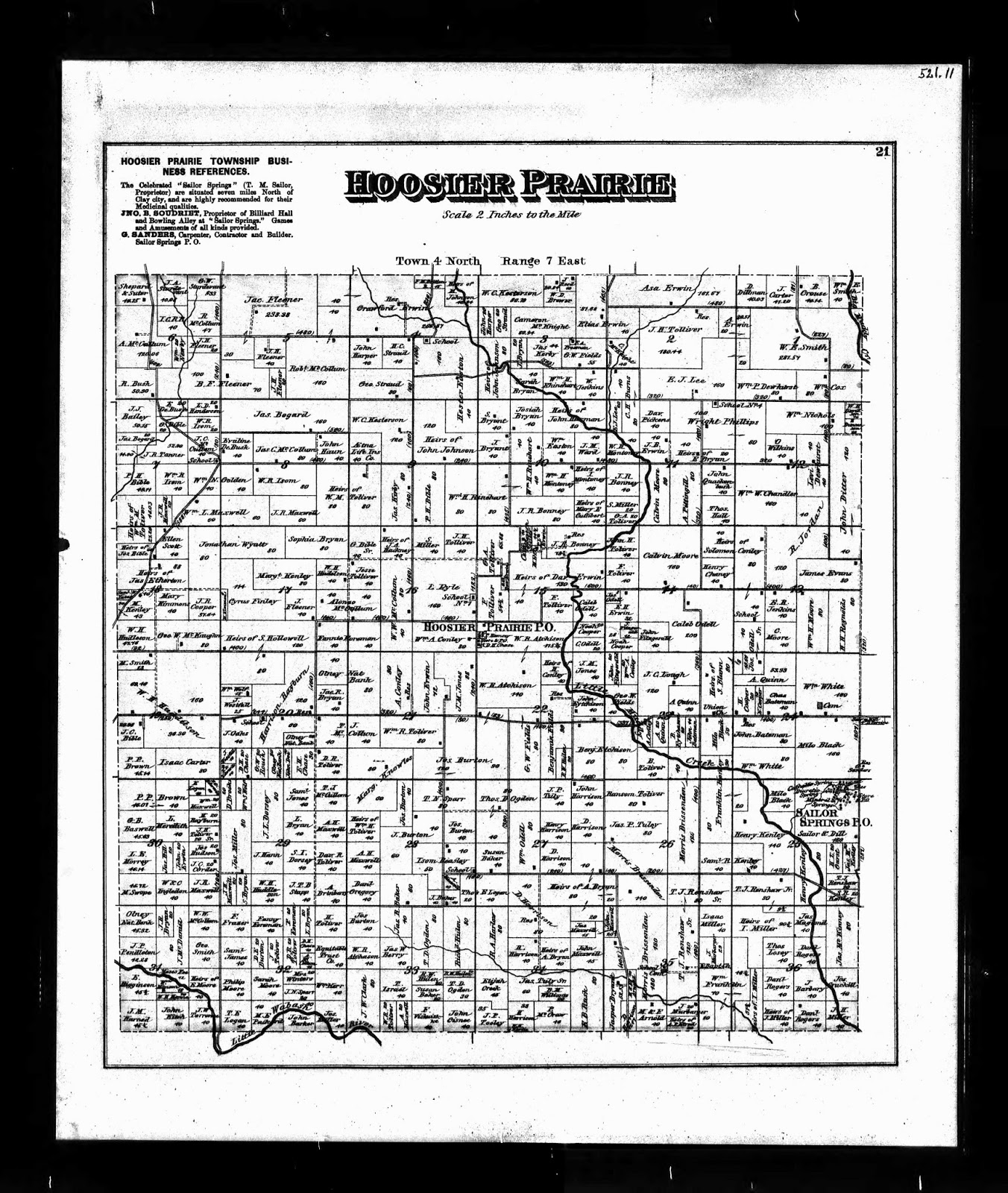 Rachel Erwin died in 1893 at age 70, and apparently Crawford liked being married, as he married Elizabeth Adams the next year. She was 69 and he was 76. He was widowed again by 1910, and living in the home of Clara and Thomas McWilliams; the 1910 census lists Crawford as a step-father in that household. I haven’t figured out whether one of the two was a child of Rachel Humes Mulligan who wasn’t living with them after their marriage, a child of Elizabeth Adams, or whether he married yet again after Elizabeth Adams died. Crawford died on December 2, 1910, at the age of 92.