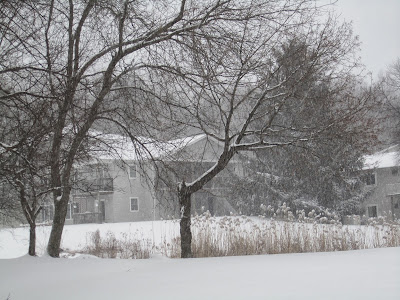 I had a good Christmas with my parents and youngest brother’s family, and a good break. I hope you did as well! [The photo is what it looked like here on Thursday.]

I don’t really do New Year’s Resolutions but I have sort of reviewed where I am in my life and set some goals for myself. The genealogy related ones involve finishing up the first pass at my mother’s side of the family, probably by the end of January the way things are going (I’ve got a couple other things going on in my life that are temporarily limiting the time I have to spend on genealogy research, but one of which, upon completion, will likely make it easier to do in some respects). The other genealogy related goal is to start and complete my first pass at my father’s side of the family this year.

I have also been considering taking up the challenge of "52 Ancestors in 52 Weeks" proposed by Amy Johnson Crow of the No Story Too Small blog. I think that I will as it plays into my Ancestor Highlight posts quite well and gives my readers something to look forward to each week.  I've missed this week already so I will start next week and perhaps, if I can, get two in to catch up. They, as always, will be based on what I have been able to find about the person I’m highlighting. I heard over my vacation that one person on my father’s side has been disappointed with some of my blog posts because I don’t “tell the stories” of my ancestors. I tell what I know/have found out. Sometimes that is fairly dry bones at this point. I expect to be able to flesh people out more in my second pass when I spend more time tracking down more different databases to check but that will also take more time. “Telling stories” will also occur more naturally when I do my father’s side of the family, even on the first pass through, because people on the Henn side, and others in that surname soup, have been keeping family stories and family trees for years and I have a lot more to draw one (like Grand-Aunt Lucille’s book, and the treasure trove of collected family stories and history one of Dad’s siblings gave him a few years ago that he loaned me this Christmas) and will be able to tell more stories. But, if such exists of my Mom’s side, neither she nor I had access to it. I’m constructing the highlight posts from the data I find on Mom's ancestors, not from anyone’s memories, and doing the best I can with it.

I have had an exciting breakthrough on one of the lines on Mom’s side of the family that I had thought stonewalled after I discovered a new source last month. I had tried several different ways to get access to a copy of it, but it’s only in 24 library collections throughout the country and they don’t send it out through inter-library loan. Finally, I found it online at a price I could justify gifting myself with (Amazon had it for $189 – and that was hard to justify), and wow, it looks like I have Amish roots! Who would have thought?! I’ll be spending the next few weeks working with that and trying to cross-reference it with other sources through Ancestry.com and I’ll eventually do a full post on it, and I expect several Ancestor Highlights will grow from it. Not this week though, as I don’t have enough information yet.

Check back Sunday to see who I write an Ancestor Highlight on this week!
Posted by Jo Henn at 11:11 PM

Email ThisBlogThis!Share to TwitterShare to FacebookShare to Pinterest
Labels: General