My DNA Test Results Are In!

Before I started my family history research, if anyone had asked me what my family’s roots were, I would have recited (from about Junior High on): “German, English, Irish, Scottish, and Cherokee.” (My parents always corrected me to say we had no Cherokee, but I believed it anyway.) I also thought I was primarily German. I knew Henn was German based on family history stories from my father and grandfather, and, my mother’s maiden name was Snyder, and that’s German. So, of course, I believed I was mostly of German stock.

After I started this family research, I discovered that I have a lot more Scottish and Irish than I'd previously believed. I haven’t found any English yet, and no Cherokee either. I moved to believing that I would turn out to be perhaps equal amounts Scottish and German, with a bit of Irish thrown in for spice.

In April I ordered several DNA test kits from AncestryDNA, and as a birthday present to me, when my parents visited, we spent one evening spitting into the little tubes provided by the company. I wish I had thought to take pictures. Anyway, you spit into this little tube until your saliva reaches a little line marked on the tube (the frothy stuff doesn’t count). Then you attach the supplied cap and tighten it just enough to release the blue stabilizing liquid which is stored in the cap. Next I set up free AncestryDNA accounts for each of my parents so that I could activate their tests and mine. And, right away, we signed their accounts over to my administration, and connected them to my tree, as they were glad to contribute, curious about the results, and not interested in doing any of the research to figure out through which relative/ancestor they might connect with someone else. Finally, I put the samples in their individual collection bags, sealed the bag(s), placed each in their own prepaid mailing box, and, later that week, dropped them in the mail. AncestryDNA says it will take 6 to 8 weeks to process, but I think it was only four weeks beforeI received the emails from AncestryDNA telling me our results were in.


That's a pretty circle, isn’t it? But I'm sure not "mainly German." I'm only 11% Europe West (AncestryDNA includes Germany in “Europe West”). My ethnicity seems to be largely from Great Britain, which, since I haven't found anyone from England yet, probably means Scotland. I have 10% Scandinavian – probably Vikings to Scotland. 9% Ireland, 8% Iberian Peninsula (Spain and Portugal)? 6% Italy/Greece? 6% Europe East? 1% Finland/Northwest Russia? And a trace amount of Middle Eastern? Well, that’s intriguing. Trade routes, do you think? In AncestryDNA, I can click on any one of those percentage ethnicity buttons and it will expand out and give me a long explanation of that country or area’s population history (who invaded whom and when, trade routes, empires, etc.).

Now, to my current understanding, while my DNA contains a record of my ancestors, I’m not a carbon copy of any one of them of them. I received 50% of my DNA from each of my parents, as do each of my brothers, but we don’t necessarily receive the same combination of DNA, because it’s randomly distributed, so if I talked my brothers into taking their own DNA test, their ethnicity charts could look significantly different from mine. Further, my parents each received 50% of their DNA, randomly, from each of their parents. And their siblings would also have randomly received 50% of their DNA from each of their parents, and not necessarily the same pieces of DNA that my parents received. This is why Ancestry keeps stressing that the more people you can get tested in your family, the more you can learn about your historical ethnicity.

Now, let me show you my father’s and mother’s ethnicity reports. 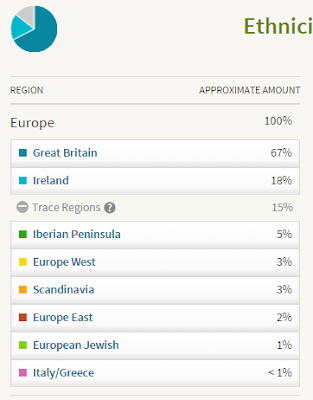 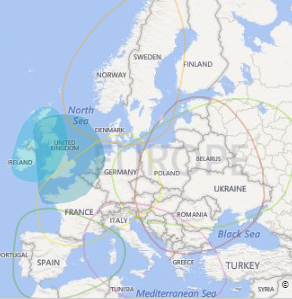 Well, he’s definitely not mainly German either. 67% Great Britain (based on what I’m seeing in his family so far, mainly Scottish) and 18% Ireland. 5% Iberian Peninsula (Spain and Portugal). Only 3% Europe West (even though I have managed to trace his paternal line back to Doerlesburg, Baden, Germany)! 3% Scandinavia – Vikings? 2% Europe East? 1% European Jewish? And a trace amount of Italy/Greece? I will say that that is not entirely what I was expecting; but after I’ve had time to think about it, I probably should have anticipated the more significant amounts to be in Great Britain and Ireland.

And here’s my Mom: 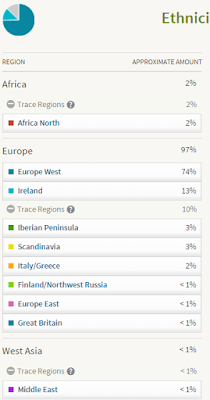 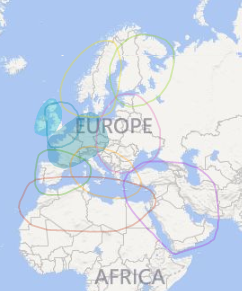 Now I’d really like to test all of my aunts and uncles to see what their portion(s) of the random DNA shakeout would reveal! (And brothers, and cousins…)

In another section, AncestryDNA gave me DNA matches that were found among others who have submitted DNA to be tested by AncestryDNA. By clicking on “view all DNA matches” button, I see a list of people divided into first cousin (actually I don’t have any first cousins on the list yet), second cousin, third cousin, 4th-6 cousin. I can click “view match” for any of the names, and, if that person has a public tree on ancestry, I can see the common ancestor and a line of descent to that person and a link at which to contact them, or, if their tree is private, or they don't have one online, it just gives me a link at which to contact them.

In a third section, AncestryDNA may give what it describes as ”New Ancestor Discoveries” a section still in beta form which, it says, gives me “potential new ancestors or relatives who are not already in your family tree”. There are none listed for Mom and me. There is one listed for Dad, but upon looking at her, it’s not someone new; I have her on my tree but under a different spelling of the last name. I’ll check it out to see if they’ve got anything more on her this way.

Lastly, there is a section titled “DNA Circles,” also still in beta. These are my DNA circles: 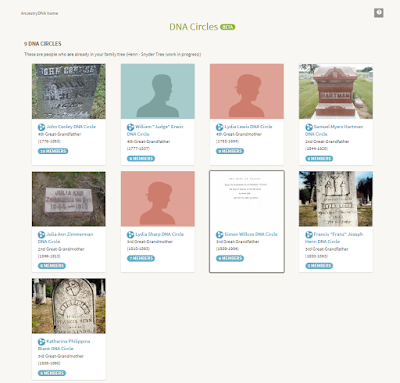 My DNA Circles
(Copyright to AncestryDNA, fair use)
Click to Make Bigger

It appears to be a separate listing of people who are also related to people you already have in your family tree, and therefore are probably related to you. It lists the ancestor, with a graphic, and tells you how many people in your list of matches also have this person in their family tree. If you click on it, inside then gives you their screen names and the same ability to view an abbreviated connection tree and their contact information as found on the DNA match list, described above. Since the same information is on the DNA match list, I’m not really certain of the purpose of the DNA Circles yet, other than to make it easier to find these particular persons.

In looking at the circles given for my Dad, my Mom, and me brings home the random distribution of DNA and makes me glad that I got both my parents tested when I did. I have all the same people in my list of circles as my mom does, but Dad has five ancestors with circles and I only have four of them. I guess I didn’t get the segments of DNA that connected me with that extra person on Dad’s circle list, James McFarlane (my second great-grandfather), in my 50% of his DNA.

So … anyone else in my family intrigued enough to take a DNA test?
Posted by Jo Henn at 1:33 AM